The meeting was held on October 5, 2017 at Valencian Tourism Board facilities, and was attended by eight representatives of the fishing sector form the Provincial Fishermen Federations of Castellón, Valencia and Alicante, as well as two representatives of the departments of the Regional Government in charge of Tourism and Fishing.

One of these coastal regions in which the business model of fishing tourism is going to be tested is the Valencian Region, where this activity, recently regulated (Regional Decree 56/2017), is still incipient. 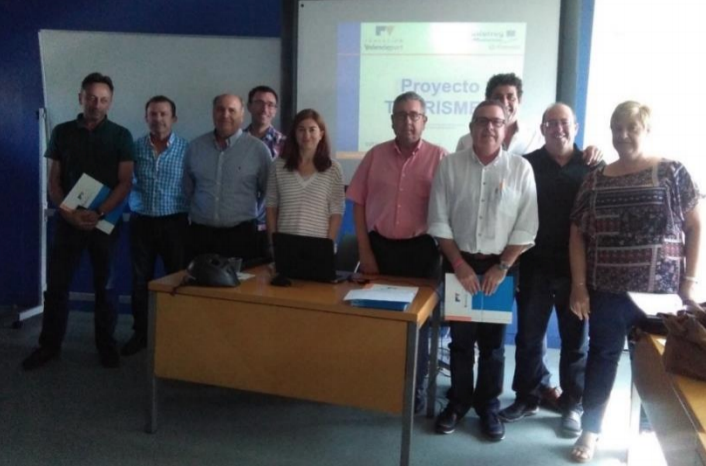 Here the project intends to test the model in order to obtain an improved version from these real practical experiences, which could be later reproduced in other Valencian coastal areas, by adapting the model to the particularities of each zone. In order to carry out this initiative and to take advantage of the opportunities it offers, it is essential the collaboration of the Valencian fishing sector, as well as the involvement of tourist agents driving this activity. In that sense the project plans to develop various activities including meetings, workshops, study visits and training activities.

Among these activities, the project foresees a series of meetings in which these agents (Local Focus Groups) can discuss and make contributions about the main variables that the fishing tourism business model must incorporate according to the particularities of the Valencian Region.

The meeting was held on October 5, 2017 at Valencian Tourism Board facilities, and was attended by eight representatives of the fishing sector form the Provincial Fishermen Federations of Castellón, Valencia and Alicante, as well as two representatives of the departments of the Regional Government in charge of Tourism and Fishing.

Before going into the meeting discussion remarks, it is important to point out that both Spanish and Valencian regulations on fisheries diversification differentiate two concepts:

The meeting served to gather and reflect the perception of the fishing sector representatives of the on some key aspects for the take off and development of fishing tourism in Valencia Region.

Although it is an incipient activity, and therefore it is subject to some uncertainty about its potential development as well as some scepticism among part of the fishing community, a priori there is predisposition on the part of fishers to initiate fishing tourism initiatives. This is essential since without their participation there is no product.

In this sense, there seems to be a general consensus about the potential of this activity as a significant source of income, surpassing in particular cases its complementary character (because of the possibility of focusing the activity on the realization of demonstrative fishing trips), and thus contributing to a certain extent to reduce the fishing effort during certain periods of the year.

Participants also agreed that it is preferable to add value to the activity rather than compete lowering the prices, since the consideration of the price as cheap or expensive is directly related to the experience that fishing tourism is able to offer in each case.

It should also be noted that the typology of the fishing vessel (length, gear, etc.) determines key aspects of the particular business model (e.g. initial investment or type of activity). Therefore, the definition of the fishing tourism business model must be made by fleet segments (e.g. according to length), considering different specific elements in each case.

As for the obstacles that seem to be preventing to a greater extent the implementation of tourist- fishing initiatives, participants pointed out the uncertainties generated by a lack of awareness about the specific technical requirements related to the necessary adaptations of boats and the equipment that must be acquired to obtain the corresponding authorization. These uncertainties seem to difficult the feasibility assessment of some initiatives. The set out of certain basic standards, which could be agreed between the different provincial branches of the Maritime Authority, could facilitate the estimation of the investments to be made, which in turn is a key factor in order to be able to assess the viability of each initiative.

In this sense, following the specific steps of the first authorizations granted according the procedure established by the tourism fishing Decree, participants agreed that the elaboration of a roadmap could also clarify the administrative procedure and support the assessment and start-up of new initiatives. With regard to promotion and sale channels, there seems to be a general consensus in granting this role to third parties (providers of other tourism services, including fishing tourism intermediaries), limiting the role of fishermen to activities linked to the direct provision of the service. Because of the characteristics of fishing tourism (based on a direct and close relationship between tourist and fisherman), it is essential that fishermen have enough resources to ensure a satisfactory tourism experience. It could be achieved both through training and the production of ad-hoc graphic or audio-visual materials. In this sense, in addition to customer relations aspects, participants highlighted as interesting topics to include in the training actions planned within the project, the following ones: responsible tourism, key factors to be considered within the business model, good practices and success cases; and marketing and promotion.

As for the key associations, great importance was given to the private sector in the commercialization side and to the public (especially local and regional administrations) in the promotion side.